IN THE BEGINNING SERIES

“Destruction of the natural forest is the main threat. The indigenous peoples living in the forests where rare species are found naturally desire money to improve their health, education and other prospects. They are encouraged to clear the land through logging for tropical hardwoods or for planting banana, palm and other cash crops thus destroying the vines on which the birdwings depend.”

HOW CAN SUCH INSECTS BE PROTECTED? Ironically, one solution maybe for the indigenous people to be encouraged to farm these insects by planting their food plants, harvesting a few specimens and selling them for high prices. The breeders and collectors of the insects (the local people) should receive a good price instead of the middlemen. This should encourage habitat preservation, the survival of the local wildlife species and give the indigenous people an income.

< BACK TO ALL PAINTINGS 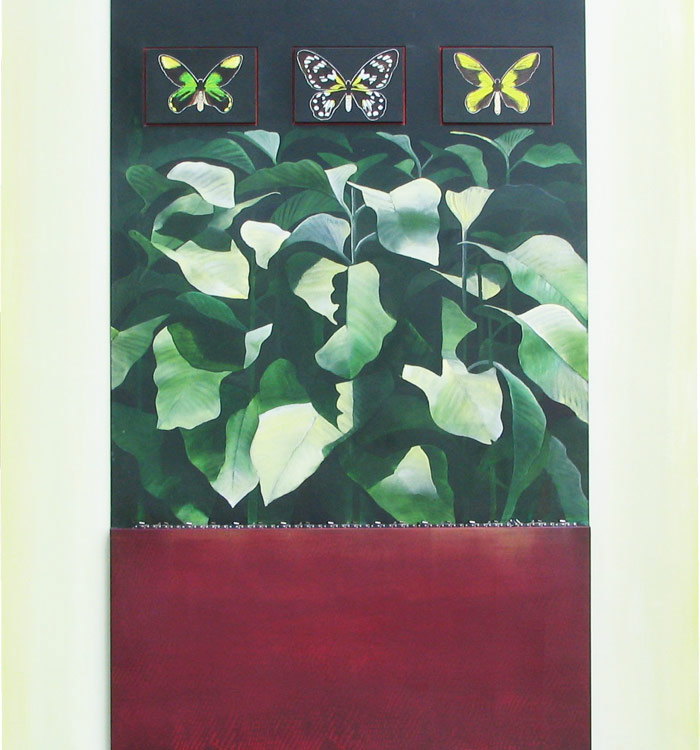 HE SAW IT WAS GOOD
O. Victoriae
Regina, Female & Resplendans

This is thought to be the second largest butterfly after the Queen Alexandria’s Birdwing. It is found mostly in Papua New Guinea though some sub species are found in northern Irian Jaya and adjacent Islands. It lives in both primary and secondary forest from the lowlands to the highlands. As with all birdwings it breeds on the aristolachia vine, the poisons of which are passed on to the adults or imagos.

It is classified as Vulnerable in the ‘Red Data Book of Threatened Swallowtail Butterflies of the World’. 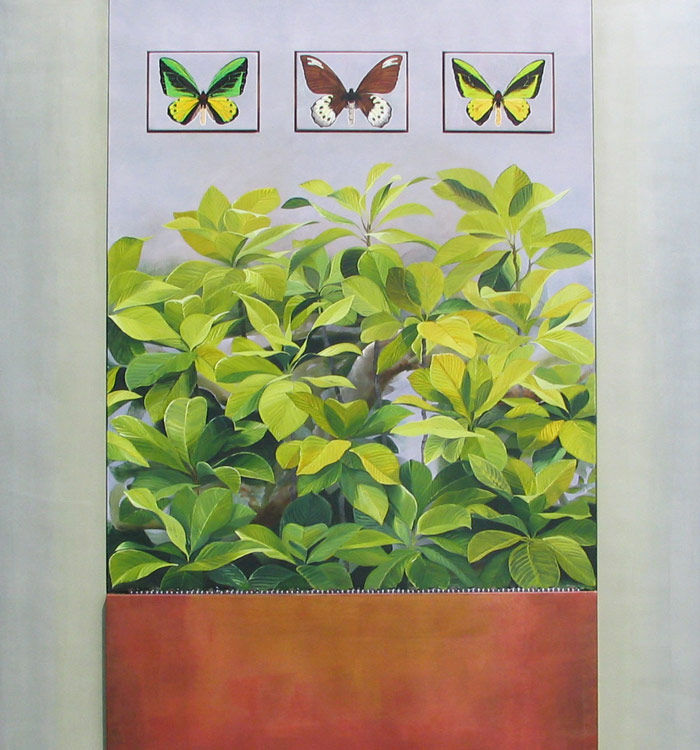 HE SAW IT WAS GOOD
O. Goliath
Samson, Female & Titan

This butterfly flies in damp and cool gorges in the highland rainforests of northeastern Papua New Guinea and a few small locations in Irian Jaya.

The markings are very similar to the Ornithoptera species Paradisea, Tithonus and to a lesser extent Rothschildi except that the wing shapes in each are very different. Some ornithologists refer to these four species as ‘Schonbergia’ as distinct from Ornithoptera. In ‘The Greek Myths’ Robert Graves describes the Chimaera as “a fire-breathing she-monster with a lion’s head, goat’s body, and serpent’s tail”.

Webster’s also says ‘it pertains to an impossible or foolish fancy’. Possibly this species was seen only fleetingly. There are 2 subspecies.

Ornithoptera chimaera is classified as Indeterminate in the ‘Red Data Book of Threatened Swallowtail Butterflies of the World’. 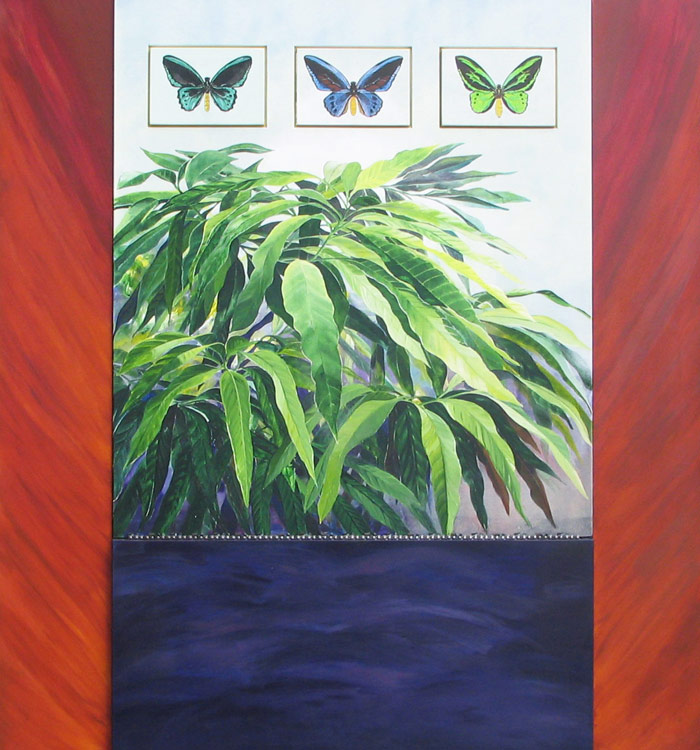 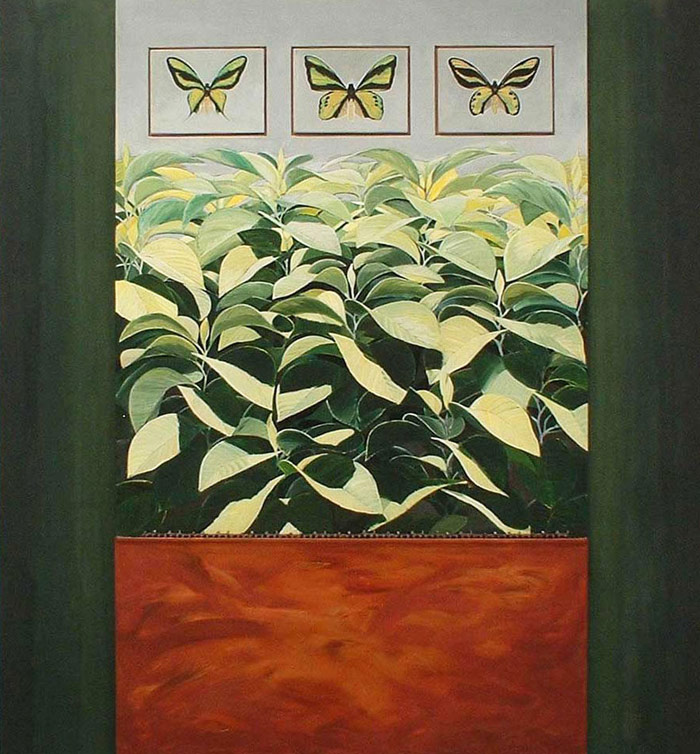 HE SAW IT WAS GOOD
O. Paradisae & Chimaera & Tithonus

It can be seen that, although these three species have very similar colouring and patterning, the wing shapes of each are very different. They also occupy very specific habitats.

The Paradise Birdwing has the uniquely shaped hind wing and is found on the northwest slopes of a high mountain range, which forms a backbone of New Guinea. On the other side of the range is found the similar shaped Meridionalis Birdwing.

Chimera has a somewhat squared forewing and flies in scattered steep and damp gorges high in the mountains of New Guinea. It flies above the canopy.

Tithonus has the strange spatula shaped wings rather reminiscent of the Alexandria and Victoria birdwings. It has a coppery orange sheen to the wings, which is suggestive of the Croesus Birdwing although that butterfly is mostly orange with a green sheen. Tithonus flies at lower altitudes up to 1200 meters and is apparently found in a very small area of the Onin Peninsular and nearby islands.
For more information refer to the specific butterfly. 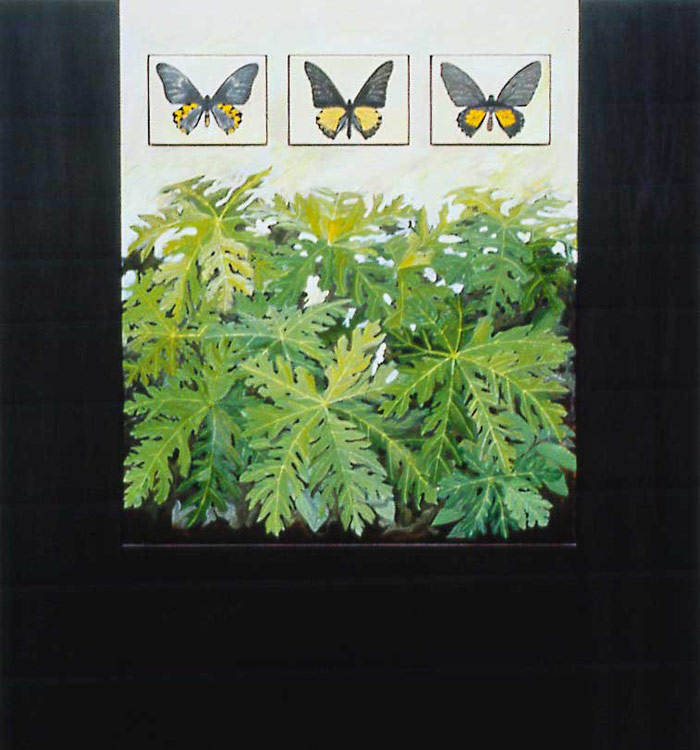 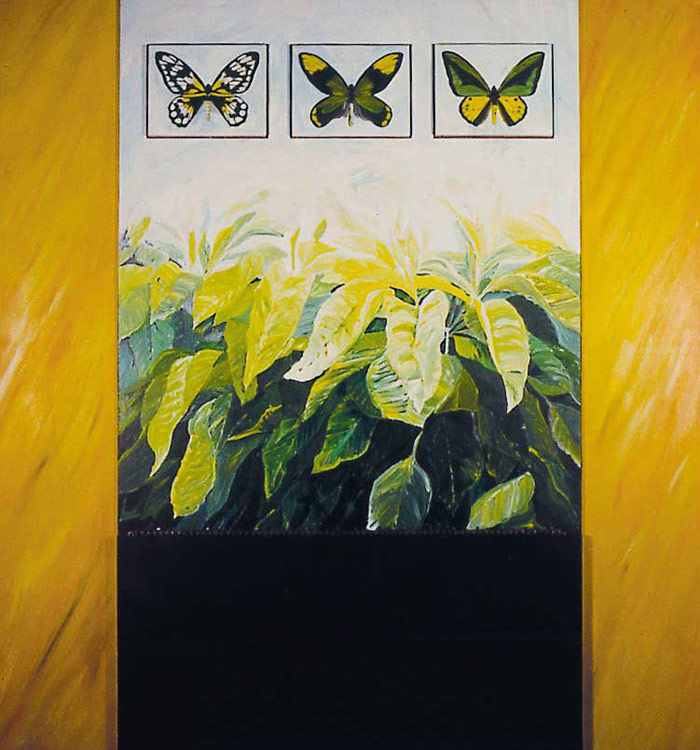 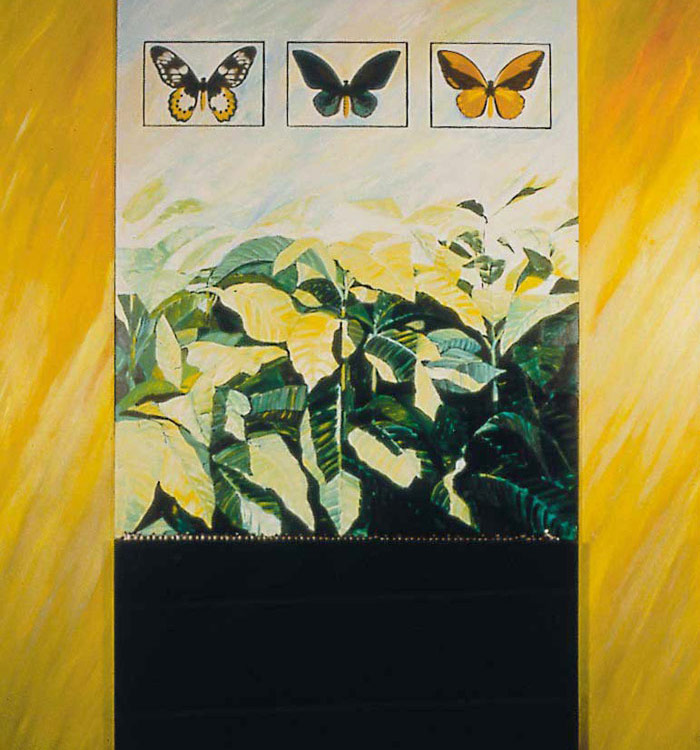 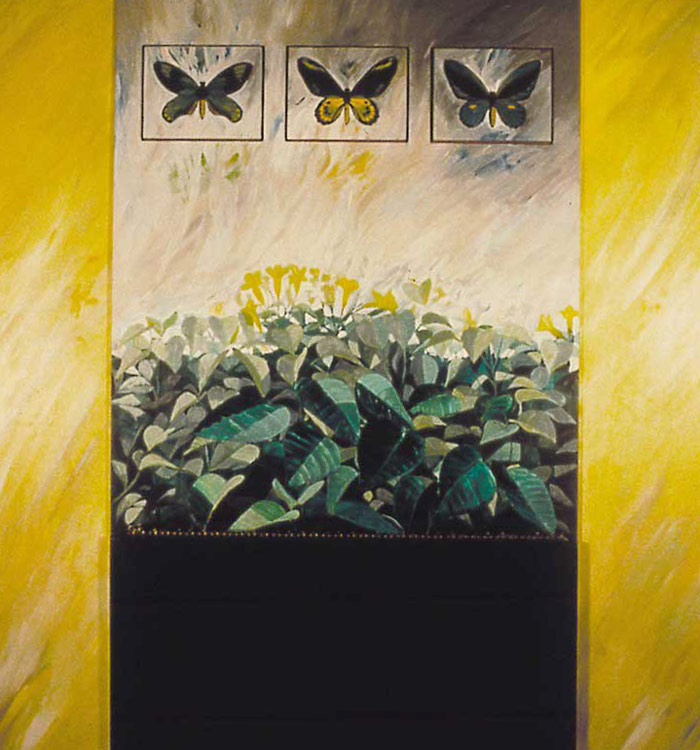 These butterflies are restricted to the Solomon Islands where there are seven subspecies most of which are named after the specific island on which they are found. The males have oval shaped wings with the rear wings being very elongated and wrinkled. The most similar species is the Queen Alexandria’s Birdwing.

They fly high in the canopy, and in 1885 when a naturalist with a Royal Navy expedition was keen to capture one, a Royal Marine shot one down with a shotgun. That very butterfly is still part of the collection in the Natural History Museum, London.

Lord Lionel Walter Rothschild financed many of the late Victorian scientific expeditions to the Australasia region and this butterfly was named by its discoverer, Alfred Stewart Meek, for his benefactor.

Rothschild’s Birdwing has the smallest distribution of any birdwing butterfly and is found in northeastern Iran Jaya in sunny, wind sheltered, ravines above the 2000 meter level.

It is classified as indeterminate in the ‘Red Data Book of Threatened Swallowtail Butterflies of the World’.

This is one of the least known of the Birdwings. It is found only on Obi Island, in the Indonesian Moluccas. Obi has been closed to outside travel for a great many years and few examples are in collections. Little is known of the numbers of this butterfly but it is assumed that the Aesacus is fairly secure, as no logging has been allowed on the island.

Robert Graves says that Aesacus was a son of Arisbe, the first wife of Priam, King of Troy. When Aesacus great love Asterope, the daughter of a river, died he tried repeatedly to kill himself by jumping into the sea from a high cliff. Finally the Gods took pity on him and turned him into a diving bird “thus allowing him to indulge his passion with greater decency”.

It is classified as indeterminate in the ‘Red Data Book of Threatened Swallowtail Butterflies of the World’. 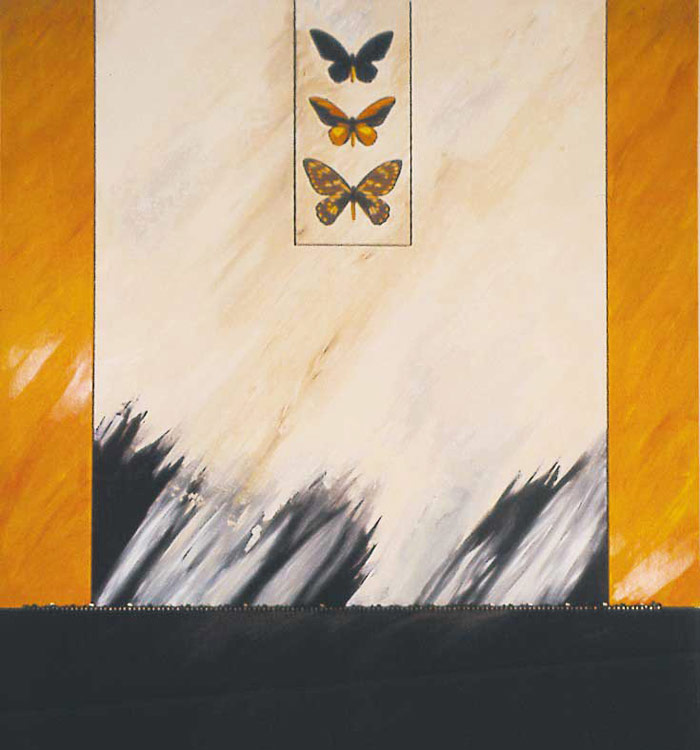 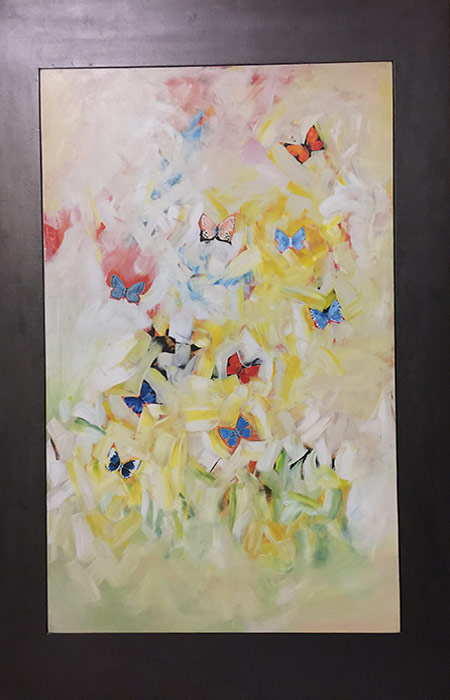 IN THE BEGINNING
And He Gave Man Dominion (triptych) 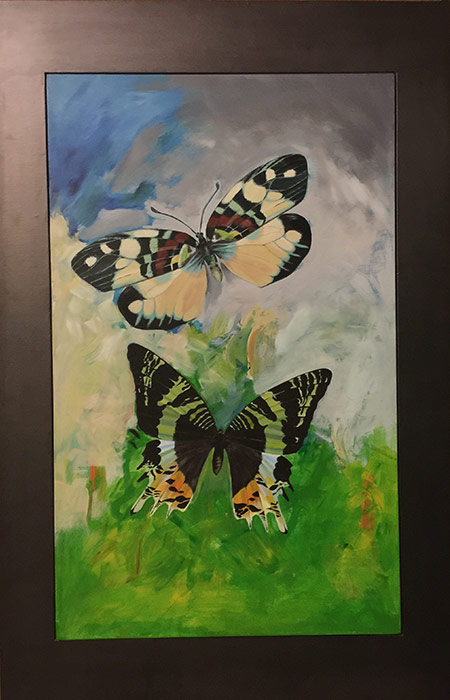 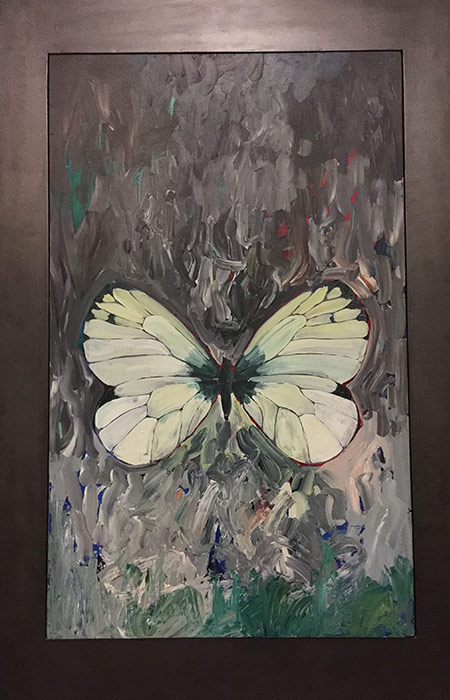 < BACK TO ALL PAINTINGS